Vacation begins! We are back on solid land, it is 8 a.m. on the clocks in Amsterdam, but our bodies try to tell us it is only 2 a.m. We ignore the body clock. A prearranged taxi takes us to our hotel. This time we are staying in Haarlem, since we’ve been to Amsterdam several times. Plus our ship will not be at the Amsterdam port, but at Ijmuiden.

We check in to our hotel, look longingly at the bed, but head out determined to fight the jet lag. The streets are unusually empty and quiet as we work our way to the city center. Apparently Mondays are a late opening day in Haarlem. Stores don’t open until 11 a.m. We wander and wonder, eventually our stomachs tell us to eat lunch. Unfortunately we did not choose wisely. My goal for this day was to find the Corrie ten Boom house (click here for information), so we could return for a tour on Tuesday. We wandered, but were unable to find it. By then our bodies were begging for a rest, so we returned to the hotel for a nap. After the disaster of lunch, we decided to play it safe and eat in the hotel restaurant. It was an early night for us.

Tuesday found us more refreshed and ready to tackle the day. I had spotted a business center with computers, so I printed out directions to the Corrie ten Boom house. We found it but they only take 20 people in for a tour so we would have to return for the later tour. We visited the Cathedral of St. Bavo and ate lunch (better choice) before we returned forty-five minutes before the tour time. We were not the only ones with that idea. Several others who had been excluded earlier were waiting too. What an interesting tour and story! The Hiding Place written by Corrie ten Boom tells the story of how they hid Jews from the Nazis in their home.

On this night, we had a dinner date with another couple who would be on our ship. We “met” via the web site Cruise Critic. Nancy and Bill invited us to join them for a rijsttafel at an Indonesian restaurant. Rijsttafel translates to rice table. The collage below shows the food. I have no idea what each dish is called, but it was all tasty. Then we finished off the evening with a gelato. I love exploring the foods in new places!

Wednesday we took a taxi to the port of Ijmuiden. Check-in is always a slow process, but eventually we found our way onto the ship and since we had all our luggage with us, we were able to unpack and settle into our home for the next two weeks. We were on the

Prinsendam, which is a smaller ship (only 800 passengers). What a surprise to find a walk-in closet!

Day 1: a sea day. Perfect day to relax and get our bearings of where things were on this ship.

Day 2: Portland, England. Many people went to Stonehenge, we did not. We joined two other couples on a Jurassic Safari of the Dorset coastline. Spectacular views of the coastline and countryside were coupled with stories from our guide Gary. Gary had grown up in this area, so he was proud to show it off. He even provided us with morning tea and a Victoria Sponge cake and flapjack cookie bars, both treats made by his wife. YUM! The collage shows a few of the sights of the day. 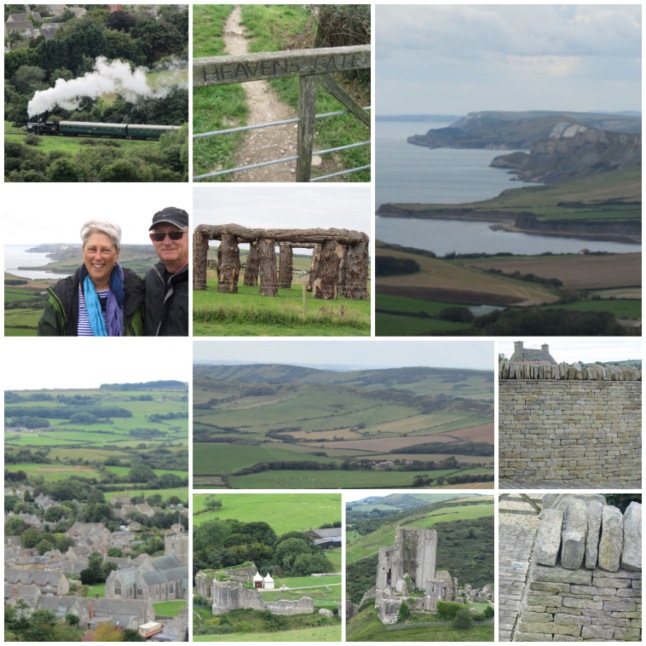 A steam train chugs through town as we stand high on a hill overlooking Corfe Castle. That is not Stonehenge, but Woodhenge, a joke for someone’s birthday. The stone walls have no mortar, they are called dry stone walls. Incredible to see! This is the Jurassic coastline.

Day 3: St. Peter Port, Guernsey. We booked a bike tour for this island. The guide picked us up (and others who booked through the ship) and took us to the other side of the island. Unfortunately he didn’t stop very often, so I don’t have a lot of pictures. I was surprised to learn that Guernsey is not under British rule. They have their own currency and government. Also, there are only about 200 homes available for non-natives of the island to own. One must marry into a family to be able to purchase a home besides the ones allotted for other people. We did see some remains from the German occupation during World War II.

Victor Hugo lived on Guernsey Island, we found his house but were too early for the museum. The third picture on the left is Fort Grey. They call it the cup and saucer.

Day 4: Isles of Scilly. Our journey took us to the island of Tresco where there is a sub-tropical 17 acre garden. We were given a tour of the gardens by their head gardener. It was a fascinating garden to explore. Even in September, there were many plants blooming. Enjoy the view of some of the plants. 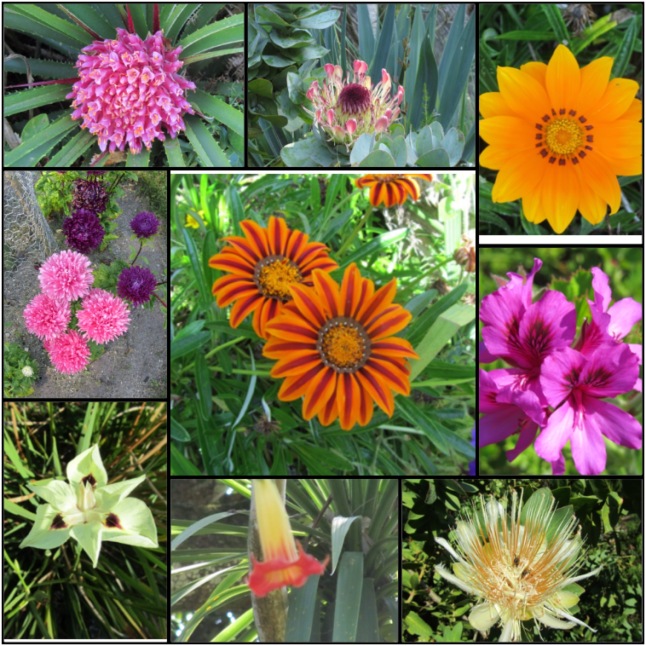 Here are a few of the beautiful flowers found in the gardens.

Other sights from the gardens. The bird is a golden pheasant. They are just wandering around hoping someone will feed them.

So many more days to share, I hope you will return next week for more sights of our vacation.

One of the luxuries of being sort-of-retired is taking a vacation when educators and students have returned to the classroom. This freedom from school year time restraints is savored. For the last three Tuesdays I have been cruising the seas of the British Isles. Today’s slice returns to the very beginning of our trip.

Sunday, August 30, found my husband and I ready to begin our adventure cruising the British Isles. We were not looking forward to the three flights that would bring us to 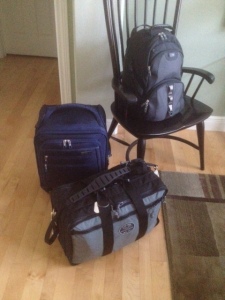 Because we didn’t know if we’d be able to check bags on the return trip, we opted to do carry-on only. This helped out going too.

Amsterdam, but they would be endured. First flight took us west before we could begin the journey east. It was a short layover, but there were no problems making the flight. Leg one completed.

The second segment took us from Dallas to Philadelphia. Too many planes wanted to leave at the same time. Slowly we moved up the runway. Finally we were in the air (about 30 minutes behind). My worry meter began ticking, we didn’t have much time between the flights. However, the worry dissipated with the smooth flight and landing.

As we pulled up to the gate, I noticed our next gate was very close. Relief flooded through me when I realized that we would not have to change terminals. I commented how lucky we were to my husband. Big mistake! (Don’t count your chickens before hatching would be appropriate here.)

The pilot’s voice came over the speakers, “Settle back into your seats folks. It appears that the bridge to connect us to the airport has malfunctioned. They are looking for someone to reset it.”

I watched out my window, nothing moved. I glanced at my watch, the hands were flying around the face. Back and forth I glanced. My mind began to spin various scenarios if we missed our flight. I was not worried about missing the ship, because we had built in a two day cushion prior to the cruise. But taxis and hotels must be contacted and made aware of our issue. Where would we stay tonight if we are stuck in Philadelphia? Just as I am resigned to the fact that we will not make our flight, the doors opened.

I was grateful we did not check any bags, but have all our luggage with us as we made our way to the nearby gate. Within a few minutes, they began boarding this flight. Relief sent all the pent up stress away. The third and final leg was about to begin.

Eight hours later we land in Amsterdam. The pilot announces there is a problem with the jet way. The airport is bringing a staircase to the middle door. My husband and I just shake our head. What are the chances of this? This time there is no stress, I am at my final destination for the day, there are no more flights today. Thus the trip begins . . .