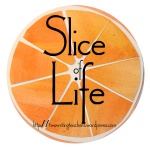 Growing produce is a challenge! I could never be a farmer. You just never know from one year to the next what will happen to your crops, plus the biggest factor, the weather, is out of your control.

Last year the tomatoes never got their act together to produce much. This year, we are awash with tomatoes. Unfortunately most of them are still green balls. 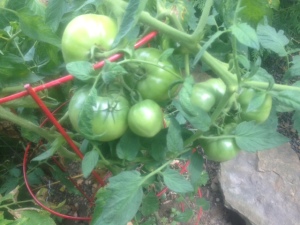 I cannot believe the clusters of tomatoes this year.

Recently I counted the possibilities of tomatoes, there were over fifty potential tomatoes hanging. Now if only they ripen gradually, I should be set for at least a month of savory, home-grown tomatoes with every meal. 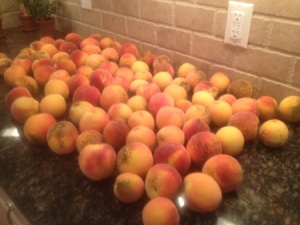 The beginnings of last year’s bounty.

Last year the peaches were bountiful. I was knocking at every door handing out bags of peaches.

This spring, the tree never had a chance to bloom. It was with sadness I gazed at my tree, longing for the beauty of the golden peach. However, one day I did notice there there were a few fuzzy balls beginning to form. They were difficult to see, but I kept watching, as they slowly began to take on the blush of a golden peach. Each day I would check the ground under the tree to see if any had fallen. Thankfully, they were hardy and continued to hang on until we decided they needed to be picked. The ladder was brought around and by str-e-t-ch-ing my husband was just able to pluck them. There were five and they were the sweetest peaches of the year. All the sugar from the tree must have pooled into those five peaches. Yum! There was no sharing this year. 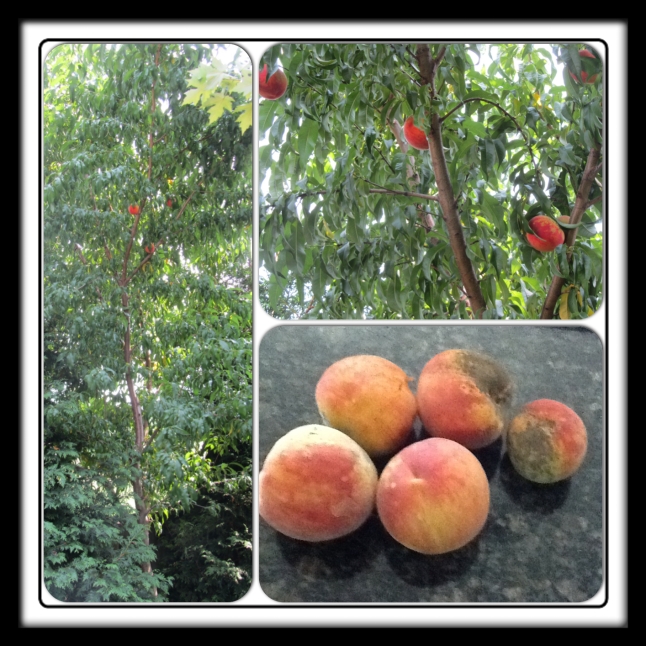 Can you see how high up the peaches were? Aren’t the five peaches a sad sight compared to last year?

I wonder what my “crops” will be like next year. Would it be too much to ask for a bumper crop of tomatoes AND peaches?